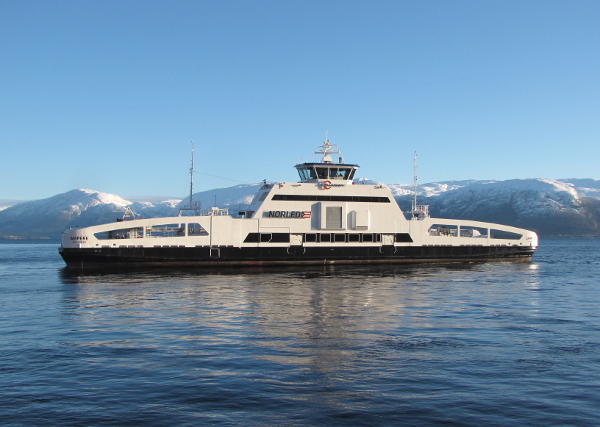 The world’s first large all-electric car ferry started operating in january 2015 and is a 100 % battery driven catamaran in aluminium. The 80-meter long vessel can carry 120 cars and 360 passengers across the Sognefjord between Lavik and Oppedal in southwest Norway. Crossing time is 20 minutes. Time at port is 10 minutes, time which will be used to fully charge the 1 MWh lithium-polymer battery pack on board.

Ampere, the world’s first large fully electric vessel, has received the Seatrade Clean Shipping award for 2015. Owned and operated by Norled and designed and constructed by Fjellstrand, the DNV GL classed car ferry is a fully battery driven catamaran made of aluminium. Innovative not only in its propulsion system but in its highly efficient hull design the 80 metre long vessel is able to carry 120 cars and 350 passengers across the Sognefjord .
The award was accepted by Sigvald Breivik, Technical Director of Norled, on behalf of the project partners. “Norled are proud to be the first ferry operator to operate the world’s first zero emission ferry,” he said.
“We are honoured to have been part of the Ampere project and to have received this award,” said Narve Mjøs, Director Battery Services & Projects at DNV GL – Maritime. “This has been a very exciting project to work on and we were very pleased that we could help to realise the vision of Norled and Fjellstrand. Vessels such as the Ampere demonstrate how the industry can use existing technologies to improve its impact on the environment, while at the same time maintaining economic operations.” DNV GL has developed several tools to help the spread of battery and electric, such as tentative class rules for battery power, a guideline for large maritime battery systems, a new tool for qualifying battery related systems, a battery ready service (technical, economic and environmental performance analyses), battery sizing and optimisation tools and an introduction course to maritime battery systems.
This is not the first time the industry has celebrated the Ampere. During the SMM global shipping exhibition in Hamburg, the Norwegian shipping magazine ‘Skipsrevyen’ gave the annual ‘Ship of the year 2014’ award to the Ampere’s owners, designers and yard.