The awareness around climate and environmental problems, and the fact that man has a large influence on this are more or less accepted today. We, therefore, mean that the time has come for a change of focus towards solutions. At first, we wanted to include more aspects of human life in addition to the environment, but we felt that it could be too comprehensive since this is not a project we should run ourselves. We wanted this to be state-run or run by someone/company with capacity and resources.

The purpose with what we then called «environmental-circle», was to gather, coordinate and share good solutions in the shape of ideas, projects, visions, research, innovations etc. within the environment, in a web portal everybody could use and contribute to. The «environmental-circle» was shaped as a circle with sectors. The ideas should be placed according to where they belonged in the «environmental-circle». The main circle was divided into sectors with different themes. Then the sectors should be divided into smaller circles corresponding with the themes. Each sector should have a number indicating new ideas, as is common when receiving new mails on the cell phone. This system should be flexible and the possibility to add new themes and circles, as well as change them, should be present.

A prospect was made with logo, many circles with different themes divided into sectors and examples of solutions. An early version of the prospect was sent to the Norwegian Ministry of Climate and Environment in late 2014, without any response. An English version was prepared in the summer of 2015, adjusted and sent to three, large American companies (Apple, Google, and Tesla). They all have sufficient resources to perform the idea in practice. We never heard anything from them. We then evaluated the possibility of starting the «environmental-circle» on our own. A prospect with a request for funding of a couple of million Norwegian kroner was in December 2015, sent to a few chosen investors, funds and foundations in Norway, while the great environmental conference took place in Paris. It was also sent to chosen media. 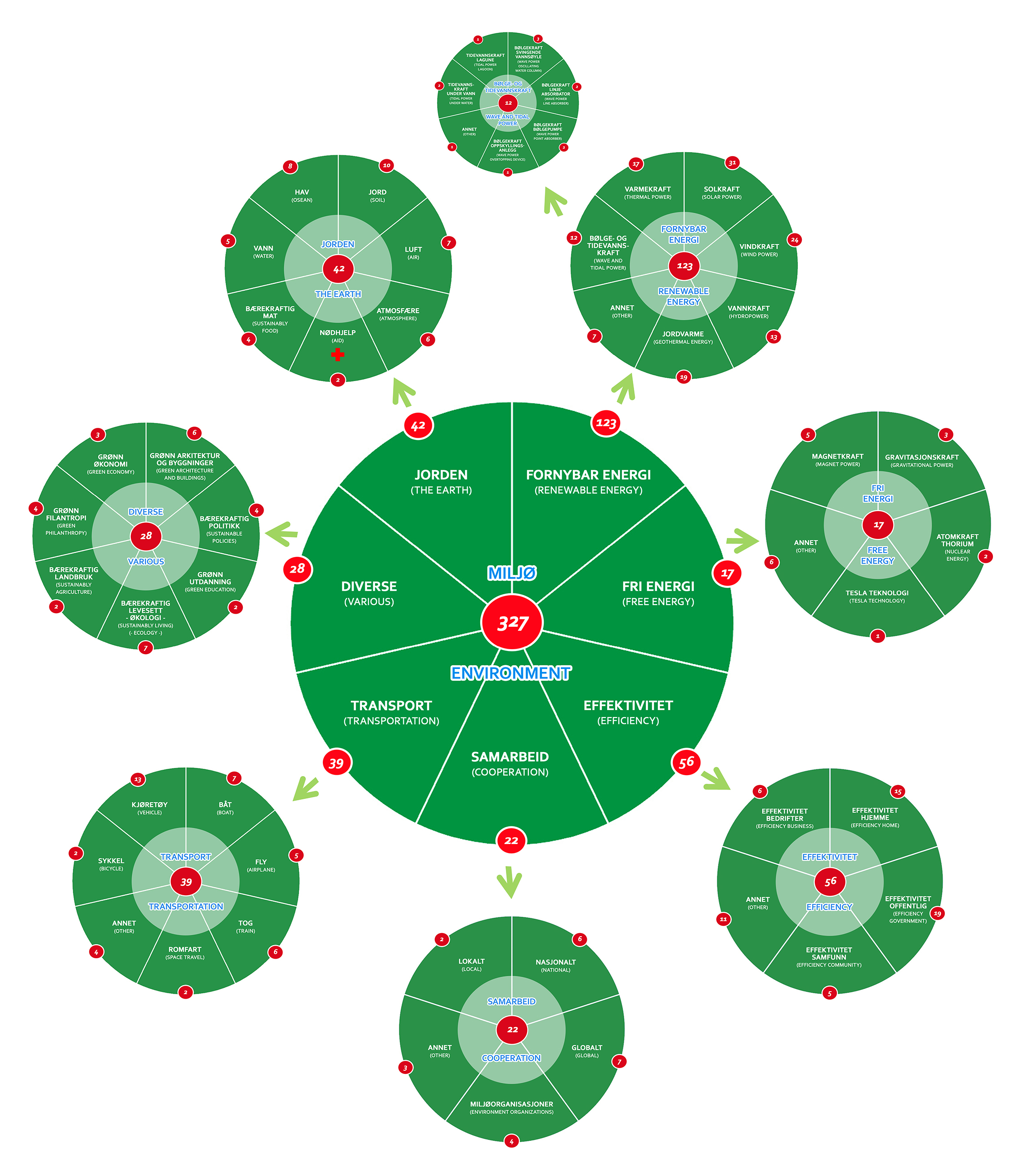 How the IdeaBank for the environment should have worked.

New solutions and ideas to solving environmental problems should be placed in the sector which it belongs to. The main circle had different sectors with different environmental themes. The sectors were then divided into smaller circles corresponding to the themes.

We didn’t receive enough response on the project, partly because it is not commercial. We then decided to start the organization on our own and to change the whole concept. The advantage of this was that we were given the opportunity to create a base for the organization without risking that is was «diluted» by other participants. This way the organization keeps more of its essence.

We walked away from consistently using circles in the design, something that was both costly and complicated to achieve. We went for a simpler system. We also extended the concept to not only include the environment, but also include all the other aspects of human life, based on Barbara Marx Hubbard’s «The Wheel of Cocreation», which include the following sectors: Environment, Education, Economics, Science, Spirituality, Art, Infrastructure, Relations, Justice, Health, Media, Governance.

At the same time, we meant that it could be an advantage to both find and inform about the real causes of our crises and problems, therefore finding the core causes. Only when we had identified the core causes, could we also understand why they had occurred and then change them.

On the 1st of February 2016, we started to rearrange the project into an organization we called Sirkelen – (The Circle – A world in balance). In the beginning of May, the same year, we decided that we wanted to have an English name and web domain. It would be easier to reach an international audience with a name and a web domain that was easy to understand. We then changed the name to GaiaInnovations – for a world in balance and bought the domain with the same name www.gaiainnovations.org. The concept is the same, but now it is easier for us to reach an audience all over the world. The international launch was in the autumn of 2016. We have now published a book (Towards a brighter future for You, Mankind and Mother Earth) about the state of the world and what we can do to get it back in balance with a focus on changing mindset. It was published in 2017. Due to lack of funding, what we get done is limited.

What we do today

What we can do in the future depends entirely on the funding and donations.
Eventually, we are considering to publish a video or a series of videos, issue an annual price, create campaigns, etc. Further, we are considering arranging conferences. We also aim to publish articles internationally. We consider publishing more books. We also aim to cooperate with other organizations whenever that is applicable.