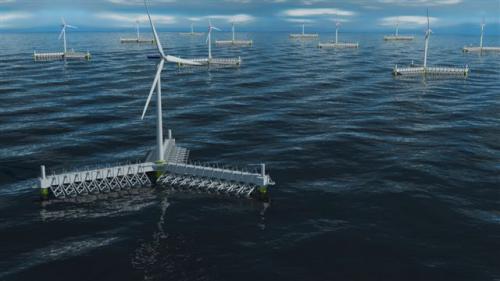 The Wavestar machine draws energy from wave power with floats that rise and fall with the up and down motion of waves. The floats are attached by arms to a platform that stands on legs secured to the sea floor. The motion of the floats is transferred via hydraulics into the rotation of a generator, producing electricity.

Waves run the length of the machine, lifting 20 floats in turn. Powering the motor and generator in this way enables continuous energy production and a smooth output. This is a radical new standard and a unique concept in wave energy; it’s one of the few ways to convert fluctuating wave power into the high-speed rotation necessary to generate electricity.

Environmental and climate issues, as well as uncertainty about energy supply, demand that we diversify our energy supply to multiple renewable and clean sources. With enough space for wave energy machines but little exploitation thus far, Wavestar is not just developing a wave power device, but energizing a whole movement.

Energy production with wave energy is more predictable than wind because waves come and go slowly and can be forecast 24 hours ahead. The Wavestar machine could also be installed together with a wind turbine which would further increase efficiency and reduce set-up costs. Wavestar understand that we need many renewable energy solutions, not just one, so it makes sense to harness the power of waves.